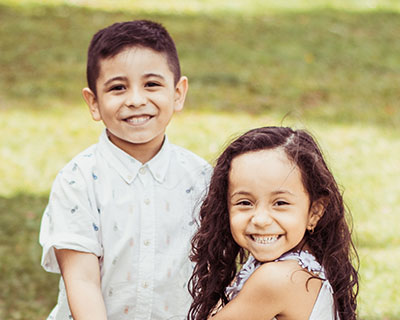 Beth and Ben – A Fairy Tale

Once upon a time a young farmer and his wife lived with their two children, Beth and Ben, at the edge of a great, dark wood. While the farmer ploughed his field by day, his wife and the two children would often explore the brambles and thickets near their ramshackle cottage, on the look-out for berries and mushrooms to add to the evening’s stew.

One bright morning, just after the farmer had gone to his field, his wife fell ill with a fever, leaving Beth and Ben to explore the woods alone. Beth and Ben had been warned many times by their mother not to stray too far from the cottage, and not to wander too far into the woods, as the footpaths soon became lost among the roots which matted the ground, and little children could easily lose their way.

Leaving their mother in her bed, sweat glistening on her forehead, Beth and Ben set out, and before long found themselves at the very edge of the wood where they knew the biggest mushrooms and juiciest berries could be found.
Turning to look back at the cottage, they saw their father toiling in the field beyond. His horse pulled the plough in front of him; they could just about hear the crack of his whip mixed in with the song of the sparrows. The sun climbed high in the sky.

Beth and Ben turned back to the wood.
“Look!” said Beth, pointing into the trees.

Ben looked, and there just a few feet away, at the foot of a twisted old oak, was a huge red toadstool which would be an excellent addition to their stew.
“We mustn’t go any further,” Ben said.
“We can almost reach it,” said Beth, “It won’t take a second to pick.”

Before he could reply, Beth had stepped into the shade of the trees and was crouching by the oak, her fingers around the toadstool.
“Wait…” called Ben and without thinking followed her into the wood, “Come on Beth; let’s go.”
“Go? But you’ve only just arrived,” said a voice high above them, “And there’s nowhere for you to go back to, is there? Take a look.”

Beth and Ben turned and looked. Through the branches they could see that a frost had fallen across their father in his field, and he, and his horse, had stopped like stone. The ramshackle cottage was encased in deathly white, and the smoke from the chimney had fallen still in mid-air.
“Up here,” said the voice. Beth and Ben looked up, and perched above them on branch was an owl like a piece of silver.

The owl danced left and right on the branch.
“Without a cure your mother will die, and your father will be still for ever. There’s the path you need,” she said, and the undergrowth parted before them.
“But that leads into the forest!” Ben cried.
“Don’t worry,” said Beth, “We’ll find our way.”

The owl took flight.
“One two three, you will see,
when the fish walks,
and the river flows back,
you’ll return to me,” it sang, and was gone.

Beth took Ben’s hand, and led him along the path.

On either side of them trees stood tall and silent. The wood seemed to be growing deeper and darker with every step they took.

After a while, they met a black coated fox sitting upon an enormous tree trunk, which had fallen and blocked their way. The fox’s coat shimmered like a piece of polished coal, and his eyes were small and sharp.

He smiled.
"Hello children, I hear you are looking for something in my wood, something you need very badly.”
"Yes,” said Beth confidently, “we need a cure for my mother’s fever, and the owl told us it was this way.”

The fox licked his lips and grinned, show a set of fine white fangs.
"Well, as you can see, my lovelies, your path is blocked and there’s no way through.”
"Maybe we can climb over the trunk,” Ben said to Beth.
"There is no way you could climb this trunk,” the black coated fox interrupted, “It’s too high and slippery. But, luckily, I know a short cut.”
"I could climb over it,” Ben said to Beth.
"Try if you like,” said the fox.

Ben ran to the fallen tree trunk and gripped the bark with his fingers. He pulled himself up with all of his strength, and pushed with his feet. He slipped and struggled, but he couldn’t get up. Every time he moved his hands, the cracks in the bark seemed to close and send him skidding back down. It was as if he was trying to climb a marble wall.
"See,” said the fox, “It’s impossible. But, as I said, I know a short cut, so follow me.”

The fox leapt down from the trunk, its bushy tail stiff and bristly.
"It’s your only hope,” he said, slinking away between the roots that lined the path.

Ben rubbed his fingers, which were sore.
"Let’s go back, Beth,” he said.
“We can’t,” Beth replied, “We have to find the cure. We have to follow the fox.”

The tip of the fox’s tail was disappearing into the forest.
"Come. Quick,” Beth ordered, “Or else we’ll lose him.”

They set off after the fox. Darting and flitting over bushes, brambles and branches; twisting and turning deeper and deeper into the cold wood, as if they were running further and further into a night.
The fox was fast. Beth and Ben breathed hard; their legs were tired, their hearts bursting, when suddenly the fox came to a halt in a clearing.
"In here,” he said, with a smile, “This tunnel will take you to what you are looking for.”

In the ground, at the fox’s feet, was an opening made of rocks and soil.
"This way,” the fox insisted, his small, sharp eyes glinting.

Ben hesitated. Beth stood still.
"There is no other way out of this wood, children,” the fox went on, his lip curling slightly.

Then, from behind them in the trees, came a great crashing sound.
"Now!” barked the fox, “Now!”

Beth and Ben did not move, they were rooted to the spot. The trees around the clearing shook and quaked. The fox bared his fangs and growled and his tail hung low to the ground.

A huge bear emerged into the clearing. It rose up onto its hind legs, it was as tall as a house.
"MINE, THEY’RE MINE!” the bear growled.
"No!” hissed the fox, and he sprang through the air over Beth and Ben’s heads, aiming straight for the bear’s neck with his fangs.

The bear swung a paw as big as a hay fork, and flung the fox against a tree, breaking its neck instantly.
"Quick,” screamed Beth, “into the tunnel.”

Beth and Ben dived down into the mouth of the tunnel, scratching themselves against the tooth-like rocks as they scrabbled in. The bear’s wide jaws gnashed at the tunnel’s entrance. As fast as they could, Beth and Ben scrambled along on their hands and knees, scurrying away from the bear’s ravenous claws like mice escaping a cat.
They kept on crawling though they had no idea where they were headed. As the noise of the bear faded, the tunnel became narrower and narrower and soon Beth and Ben were forced to slide in the mud on their bellies.
"Listen, Ben,” said Beth, “Can you hear it?”
"What?”
"Listen!”

Fat, pink worms wriggled and coiled around their fingers, in their hair and across their faces.
Beth and Ben fought with all their strength, pushing up with their arms on the walls of the tunnel, as the worms sucked them down like a swamp.
"Look up ahead,” called Beth.

Ben glanced forward and there was a light.
"It’s the end of the tunnel, we have to hang on,” panted Beth.
"ours, ours, ours,” the worms sucked and pulled, heaving the children into the squelching soil.

Suddenly, the tunnel dipped, and Beth and Ben picked up speed.
"ours, ours, ours,” whispered the worms, clinging to the children’s legs and arms desperately.

Beth rammed her heels against the tunnel wall and kicked towards the light; Ben copied her.
And, with a gasp, they were out in the fresh air and falling, leaving the slimy worms flailing in their wake.
They fell through the air for what felt like forever, before landing softly on the banks of a green river.
"Where are we?” asked Ben.
"Look at the water…” said Beth.
"It’s flowing up hill.”

The thick green water bubbled and eddied as it flowed backwards. Beth and Ben lay on the bank, exhausted.
The water frothed, boiled and fizzed forcing its way up the slope of the hill.
Blue fish leapt from the water hunting flies and bugs.

With a plop, a large blue scaled fish flipped out of the stream and landed on the grassy bank by Beth and Ben.
Ben stood up and walked over to its gasping body. The blue fish’s gills opened and closed, its round mouth puffed.
"Beth, look,” said Ben in astonishment.

The fish’s metallic body rippled. Its scales shone with images: first, their mother fevered in bed, then their father ploughing the field, next the bright red toadstool, then the silver owl, the black coated fox, the ravenous bear and, finally, the worms. Each image flickered over the fish’s dying body. Each image froze like a picture carved in wood.

The fish’s gills closed one last time and its mouth puckered shut.
"One two three, you will see,
when the fish walks,
and the river flows back,
you’ll return to me,” the silver owl swooped down beside them.
"Pick up the fish, and turn around,” said the owl.

Beth picked up the fish which was as cold as stone, and they turned around, and there was their ramshackle cottage. They ran to the front door, which now seemed smaller, and went inside. Their mother and father were sitting by the fire, wrapped in blankets. Their hair was white and their faces were old.
"We wondered when you’d return,” said Mother, “you’re just in time. The stew’s almost done, and we have to leave now.”

Ben took the pot off the stove, and Beth hung the carved fish over the mantelpiece where it stayed for the rest of their lives.

The Adventures of Dexter – New Boots

Beth and Ben – A Fairy Tale

The Adventures of Dexter – Yo-Yo

The Adventures of Dexter – Sandwich