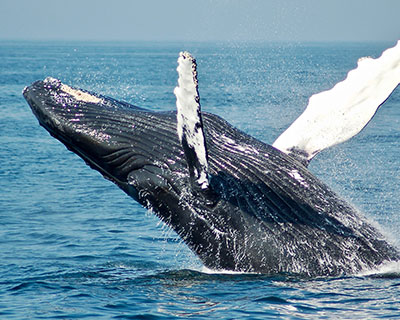 A Whale is a Kind of Spaceship

Technically speaking a whale is a kind of spaceship
Except it flies through the sea
And never goes anywhere near the moon.

But
It is a spaceship. All you need to do is look
And you can tell immediately
That it’s a space ship, a space station, in fact.

(Never trust a fact as far as you can throw it,
And you can’t throw a whale very far.
So let that be a lesson to you about space ships
If nothing else. And there is nothing else.)

Whale – mega marrow moving mindlessly
Towards the centre of nowhere
With only the scent of something
Remembered from history
To guide it to its imaginary home.

While, high up, all aboard on the star deck
The astronauts collect data on well lit computer interfaces
About the whaleship’s pulsations and ambulations
In order to keep the mighty beast from falling from the sky,
Which it isn’t in or anywhere near.

Down each flank of the whale’s smooth body
Run strips of luminescence sending fingers of green
Glow into the darkness
Warning any passing space pods, shuttles or aliens
(or families of shrimp for that matter)
To give wide berth and risk no injury.

Slowly, slowly the whale ship descends
And gladdens the heart of everyone
Watching from the earth below
Hoping for the safe return of their loved ones
From the watery orbit.

As the whaleship draws in and bursts the sea’s crust
With its brow, a single plume of seawater
Springs from the blowhole
Between its laser eyes
Spraying the bay with starlight
And the crowd stands silent.